On September 18, Scott, Oliver, and I participated in races in celebration of the University of Utah's homecoming. (Race costs supported student scholarships.)

Oliver's 1K was wonderful, despite the pouring rain. He had a blast and came in first in his age group.

Shortly after the kids race ended, the 5K started (and 19:39 minutes later, Scott finished his race and also came in first in his age group).

My race, on the other hand, was absolutely brutal. The race took us all over the very hilly U of U campus, and every time we went down a hill, I dreaded the impending climb. Honestly, when I got to the 1-mile mark, I thought it was the 2-mile mark and that they just forgot to put out the 1-mile sign.

Then, somewhere between miles 2 and 3, we were hit with crazy headwinds, and I felt like I was walking in place as I ascended the hill by the Huntsman Center. I was discouraged and told one race volunteer, "This sucks" as I shuffled by.

The best part of the race was when Oliver met me for my last .1 miles, which, true to form for this race, was uphill. We crossed the finish line together at 42:15, which I wasn't especially proud of. On a positive note, though, the race and conditions were much more challenging than last year's Be Well Utah race, which I finished in 43:20. So, I guess things could have been worse.

Here's a picture of all three racers. 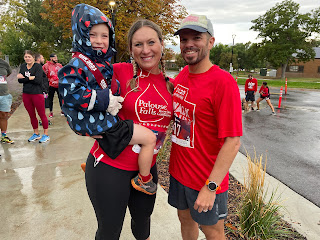 I don't think I'll sign up for this race again, but I will definitely be there to cheer my two boys on. Oliver is already ready for his next race - and race medal!