This was my ninth Bloomsday, and, once again, I completed it in Salt Lake City. Even though vaccines are readily available these days, the race organizers made the (wise) decision to keep people off of planes to attend an event where 50,000 runners and thousands more spectators gather in the streets of Spokane. Hopefully, Covid will be managed by 2022 and we can see our Pullman/Moscow/Spokane friends for Bloomsday next year.

Two months ago, Megan Whiteman and I decided to start training for Bloomsday so that we could improve our times from last year - and feel better about ourselves overall. I won't speak to her progress, but my own progress/training can be described as minimal. I tried to log miles each week, but it wasn't a priority after full days in the office every day and managing a household. Further, my second Pfizer shot was pretty hard on my body, and, even two weeks later, I still don't have all of my energy back.

But, enough with the excuses. I started my race around 10:30am on Sunday, the day that Bloomsday would have occurred on in "regular times." I decided to run the same course as last year - at Liberty Park, just 10 minutes from my home. My goal was to beat my time from last year and come in under two hours. I also hoped to run some of the race, get fewer/no blisters, and get some audiobook reading done. 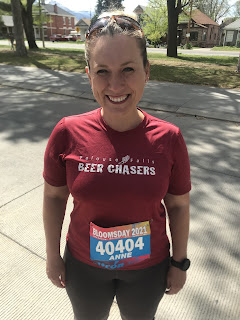 I felt pretty good throughout the race. I walked most of it and jogged occasionally so that I could keep my pace under control. I finished my first mile in under 15 minutes, and every one after that was in the 15s. I made it through a lot of my book, The Body Keeps the Score, and I enjoyed seeing my boys (who cheered me on and gave me water as they ran and biked) each time they passed me on the 1.4-mile loop. 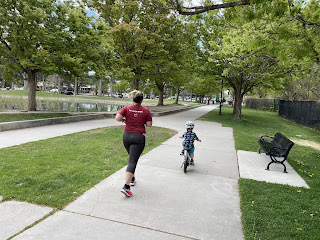 When I hit just over 7 miles, my little sweetie joined me to finish the race together. I couldn't help but remember when he finished the race with me back in 2016, when I was 8-months pregnant with him. 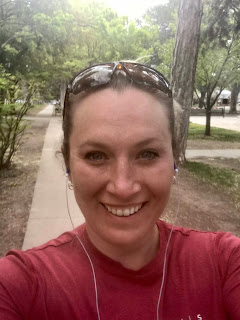 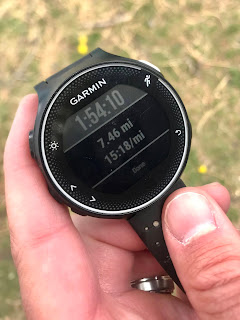 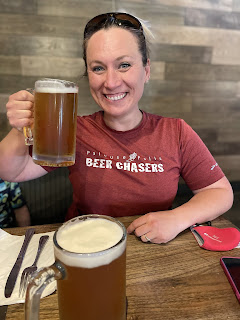 We celebrated my finish at Winger's and had a Kona Big Wave Golden Ale. (We were surprised/disappointed the patio wasn't open, and we ended up eating indoors, which hasn't happened in over a year. Note the red mask sitting next to me.)

On Facebook, I posted pictures and words of love to my fellow Beer Chasers who completed their races in Washington, Idaho, Michigan, and elsewhere. Even during a pandemic, we remembered and supported one another. I'm lucky to have them in my life - even at a distance.