Ok - so I know it has been FOREVER since I've entered a race (or even jogged around the neighborhood, or to the mailbox, or to the kitchen...), but this month, I entered two.

The first race was the Be Well Utah Virtual Walk, Run, & Roll, a "pick-your-level, pick-your-challenge, free, family-friendly event" sponsored by the University of Utah. Participants could choose to walk a mile; run a 5K, 10K, or half marathon; or bike a 1-mile, 5-mile, 10-mile, or 50-mile self-selected course. I signed Oliver and Scott up for their own races, and I signed myself up for the 5K. I mean, how hard could it it be?

Well, the answer to that question is "pretty hard!" I put on my free Be Well Utah shirt, running capris (that I've used exclusively for lounging and sleeping over the past few years), and bright pink Brooks Launch and headed up to campus to run. 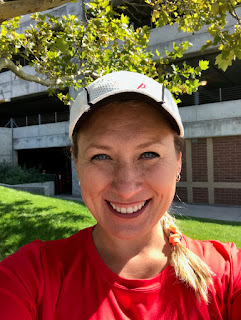 I had two goals, and I really had no idea how realistic they were. I wanted to run the first mile without walking, and I wanted to run a 12-something average mile. I only accomplished one of those goals.

My first mile I ran/jogged the whole thing at an 11:45 pace. I felt pretty good about that. I mean, I know that isn't fast or anything, but it was nice to know that I could still run a mile if I needed to and that I wasn't starting from scratch (when I couldn't run more than 60 steps without walking).

I can't help but feel kind of bad about my results even though I didn't train for even a second before starting it. Back in 2009, I ran my first 5K after only three days of training and finished in 37:49, 5.5 minutes faster than I ran yesterday. I'm eleven years older and more than eleven pounds heavier now, and I guess that showed up in my time. 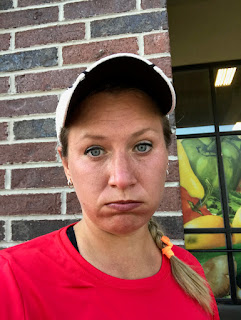 I finished my seventh Bloomsday yesterday, which is quite an accomplishment since I live in Salt Lake City (over 700 miles from Spokane) and have more than a few extra LBs around my middle these days.  ;)

When Scott said he wanted to fly to Spokane for Bloomsday again this year, I hesitated as to whether I wanted to join him.  Of course I wanted to see our friends, but the idea of spending a bunch of money to run a race while 32 weeks pregnant didn't sound like my idea of a great time, especially since everyone was meeting at a brewery post-race, and I wouldn't be able to enjoy the festivities in my condition.

Thankfully my hesitation was short-lived, and we planned our trip.  We got into Spokane on Friday, enjoyed some friend-time with Diane, Buzz, Aaron, Edie-Marie, and Stacie on Saturday, and then ran the race on Sunday morning before our flight left around 5:00pm.

The race was actually just fine.  Although my hands and feet swelled up something awful, my big, pregnant body handled the 7.46-mile walk just fine, and Stacie and I had two, full hours to catch up on our lives, enjoy the bands, and get some sun.  We stopped once to take a picture with the anti-abortionists, once to stand in line for the portapotty, and twice for Otter Pops.

Our/my finish time was 2:24:20, which figures to a 19:20/mile pace.  Granted, that was slower than my 18:00/mile training walks around Liberty Park in SLC, but we did stop a few times, and we also had Doomsday Hill to consider.  Overall, I'm pleased to have finished even if I was much slower than I've ever been (and much slower than the average 34 year-old Bloomsday runner, whose pace is 14:21/mile).


After the race, we enjoyed seeing SO MANY of our Beer Chaser and Pullman friends.  They embraced my belly and me with wide open arms, and although I really wanted a beer and hard cider,  I had a great time with everyone sans-frosty beverage.

Yesterday was Bloomsday, so Scott and I traveled to Pullman and then Spokane to see our friends and run the race.  This was my sixth year running, and I am proud of myself for doing as well as I did with next to no training.  I wasn't fast by any means, but I ran more than I thought I was going to, and I averaged under a 13:30 mile, which is pretty good for me on a course with elevation change.  I ran when I could and walked when I needed to.

Here are my stats for the past 6 years:

I don't have a big race report in me, so here are the highlights: